Sometimes I make it up as I go…

I have a plethora of bonus half square triangles from several projects I have made in the past 2 years.  Bonus half squares are made when you sew a second seam to a square you are adding to a rectangle to make a triangle be on the corner of the rectangle.  Clear as mud I know.  But when the thought of making tiny half squares for a project seems overwhelming, it is a wonder to get them as a bonus when you take the time to sew the extra seam! I learned this trick from a class I took from Bonnie Hunter years ago.  She has lots of tips and tricks on her web site that make so much sense. Waste not want not is probably her mantra.

I made a quilt last year from one of Bonnie’s books called Stars over Challotte.  It used up a huge number of bonus half squares and then of course I made a few more quilts that netted me many more bonus half squares. My little box of them is overflowing and I wanted to come up with something for using them up.

I decided to make a little 6” star with a 9 patch in the center.  The 9 patch is surrounded by half square triangles that make star points. I had lots of blue and brown and green and brown half squares so I made my little stars have brown points.

When I drafted my original pattern I needed somewhere in the vicinity of 72 stars.  I decided the stars would be pretty busy so I went back to the drawing board and made my pattern have a second block that would create the look of chains between the stars.

I liked the little tan and blue 9 patches that created the center of the star and decided to make the chain blocks from four red and tan 9 patch blocks.  I made four of them and sewed them together but there was now too much red to go with the blue and green so I went back to the drawing board. 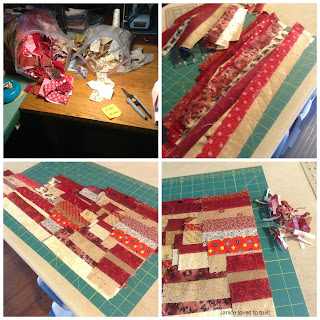 My EQ7 program really got a work out this morning as I refigured the layout of the quilt. I settled on making the chain blocks from red and cream 4 patches. I will set 5 of them into a 9 patch using cream squares to separate them, and the chain will still be red but not so overpowering. 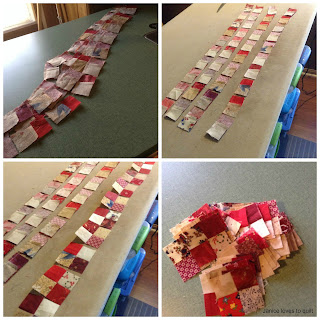 Even with all the stars I barely made a dent in the half square bonus box.  I am not even making a noticeable dent in my red and cream bags of strips as I create the four patch blocks.

I still need to round up the cream background to make squares to set the red and cream four patches together, but I have a handle on what I want to do now.

The little cutie red and cream squares are being worked up in sets of 10.  I need 250 units to make up 50 blocks my pattern requires.  I have 40 units done.
Posted by Janice at 4:20 PM No comments:

When the girls were young they spent their summer vacations here and we played between my quilting jobs.  As children interested in what any adult is doing, they wanted to learn to sew.  I taught several young ones how to make quilts and Emily and Laura were quick learners. 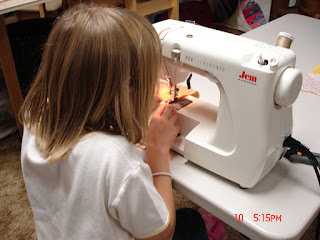 By the tender age of 6 Emily was seated at a sewing machine with the pedal on a stool so she could reach it.  Laura followed the summer after with the same setup. 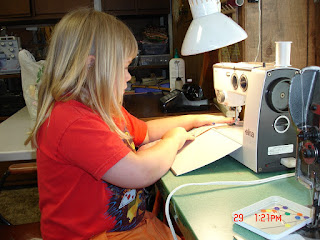 By age 7 both girls had sewn at least 3 quilts each and when they got tall enough I let them quilt the quilts they made on my longarm. 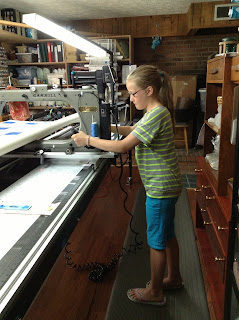 I do a lot of charity quilts and often they ask to quilt and a charity quilt goes on the frame and they feel good doing a good deed for someone in need. 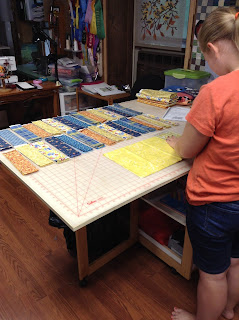 Emily is a senior now and one of her classes is community service oriented.  She visits an elementary school two times a week during her school day and she helps the teacher with 2nd graders.

The youngsters think she is an old lady and she enjoys helping them.  Talking with her about her experiences is very enlightening.  She fields difficult questions at times and answers them with maturity and wisdom. 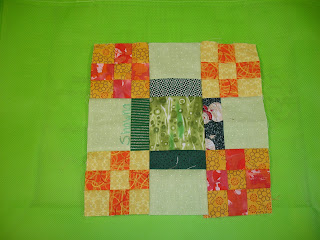 She took my book of 1000 quilt blocks in to them one day with the idea of showing them the varied types of quilt blocks and is having each child in the class design their own block.  Emily has taken on a huge task of building the blocks each child designs and will turn all of the blocks into a quilt.  I’m not quite sure what will become of the quilt after she is finished but she tells them about making quilts for charity.  I think this may go into the charity pile. 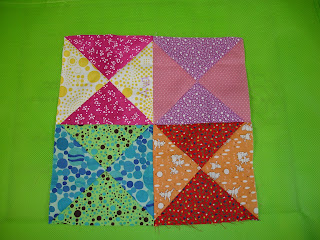 The blocks on paper are colored in by each child who designs it.  Emily asked me recently how she should go about resizing the ones that won’t fit nicely into her 9” block scheme when they are specifically 8” as drawn.  We solved that by her adding a border to the finished block. 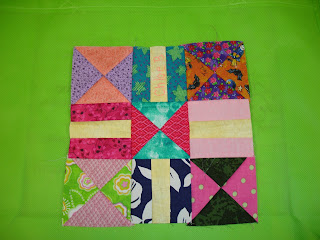 She spent this past weekend building the first 4 blocks of the 23 that she expects from her students.  One in particular is very intricate and the finished block is quite stunning.  She spent the entire weekend sewing the four blocks pictured, saving the hardest for last.  I’m very impressed with the precision she has achieved on this very noble project she has undertaken. 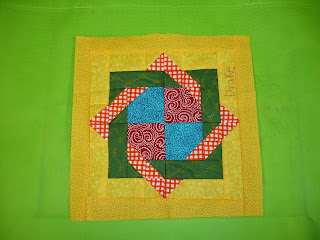 We talked about how to make the different units and I explained how much extra fabric it takes for a half square triangle block and the hour glass blocks.  She went away with her verbal instructions and came back with 4 very beautiful blocks.
Posted by Janice at 3:27 PM 5 comments: