I was getting discouraged forcing myself to sew for 10 – 12 weeks during this last sinus attack. I was making extremely slow progress, but I could at least tell myself every day that I got a seam sewn, or a block prepped to sew. Some days I would get a whole block sewn, other days two blocks. The last little while I noticed instead of doing only 2 blocks at a time I was doing 5 and then suddenly prepping 10 at a time and getting them done in a couple of days was achieved. 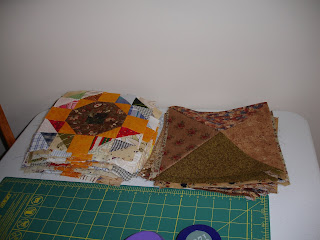 Today I finished prepping the last 10 blocks to get assembled over the next 4 days. I have to count the hour glass blocks I need for setting the Hawks Nest blocks together. 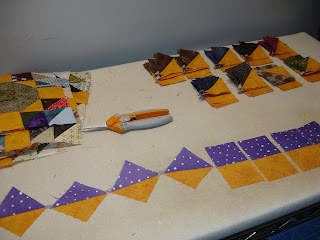 I have 20 made but I think I need closer to 40. No big deal, those pieces are cut, just sitting on a tote lid waiting for their turn under the pressure foot. 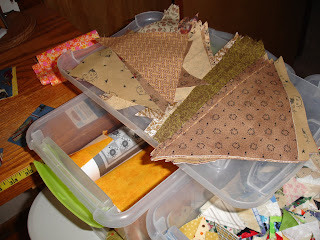 I didn’t sew them all together when I cut them because some of them just need to be paired up to be the edge setting triangles and 4 small ones are for the four corners. Setting a quilt on point is a chore I don’t often do to myself, but I like the effect on this particular quilt. 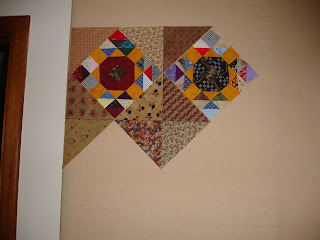 The MOJO has returned.

This week has been full. Men came and trimmed the two tall oaks in the back yard and cut down the 9 trees in a clump in the front yard. I want to fill that new open space with a low tree of some kind. A Dogwood or a Red Bud would be a beautiful addition. The neighbors are happy the oak won’t be leaving large limbs in their yards and we are no longer terrified of going into the back yard with the dog since a gigantic limb fell a couple of weeks ago and landed behind the garage.

I went to the dentist Monday, in a last minute appointment late in the day for an impression for a crown, and exiting the freeway almost ended my life as a fire truck crested the hill horn ablowing and heading for me in the one little lane left because of construction. I recall two things crossing my mind in the seconds I had to save my life. One was my foot was hitting the brake and it needed to be hitting the gas and I had to find a place to put the car. I found a place to put the car. I backed up after he passed and went on my way. The little hole I put the car was sealed up with orange barrels when I drove by on my way home. The guy behind them was probably thinking what an ass I was for driving into the construction site.  I did nothing wrong. I was not distracted. I'm a very careful driver. The fire truck was hidden behind the rise of the bridge when my light turned green. I had been carefully looking at the lane I was going to turn into because of construction blocking so much of the bridge and a pickup truck waiting to turn left onto the freeway to my left. If the fire truck driver was blowing the horn earlier, I was still exiting the freeway and was nowhere near where I could hear him coming. Life turns on a dime and I am very thankful I’m still around to worry about whether I have MOJO or not. Mojo seems so inconsequential now. To be honest, it’s probably what pushed the rest of the procrastination right out of my system.

I had a teeny tiny quilt scheduled for Tuesday and I did it on Monday, so I got a day back for myself. Today I loaded a charity quilt. I’m happy to be able to still give back.
And it’s ONLY Wednesday!

Time flies whether I am having fun or not. A lot of sayings I grew up with have been fluttering through my thought process lately and one of them is about time flying when fun is on the agenda. Thinking more deeply I see that time flies, PERIOD.

Thursday last I was on the phone for almost 2 hours signing up for Medicare. MEDICARE! Where did the years go? I am so amazed that 65 is the next big birthday for me. I am certainly grateful for the cost of Medicare coverage and the cost of supplemental health insurance to cover the rest of the medical. The lady signing me up was trying to find the most economical deal for me and was happy for all my input and clarification each time we exchanged sentences. It was an interesting experience, to say the least! The amazing thing is even getting an expensive coverage plan (her choice of words) it is a real bargain to me, as I am staggering under the cost of buying my health care on my own since Tom’s retirement plan dumped all us old-timers they didn’t feel like covering anymore due to rising costs. I had a sweet deal for 6 years before the other shoe fell. Boy did it land with a thump!

There was a set amount they put in a fund for us losers of health care and my share of that fund ran out 14 months after I got it. The last 7 months of this year before Medicare kicks in have all been on me, and it takes almost every penny of my Social Security to cover the health care payment. There is something hugely wrong with our medical system.

I have been slowly working on my current quilt projects. I seemed to have lost my mojo and finding it again has been just putting one foot in front of the other and getting through each day. I would think I was depressed, how hard it is to find the desire to sew pieces of fabric together, but I have figured out it is a massive sinus problem! Besides being hot and tired all the time and being fuzzy in the thinking department, there is that quilt each day that needs to be quilted. My schedule is full. I get the job done and go home. Then I fall asleep in my chair and wake up in time to go to bed. Where is the MOJO!

Old habits kick in and five minutes of sewing each day still gets things done. Very slowly, but a block at a time is still getting sewing done.

I’m organized and settled in the house. I miss being able to get up really early and go into the studio to quilt, but the flip side of that coin is I get to walk away from the shop and come home. There is no WiFi at the studio, so there is no computer perusing during the day. I do the quilting, I come home. I sew a block. And I look for my mojo. I know I will find it, I have found almost everything else that got displaced in two moves.

I hope to get more quilts going and I need to remember I have finished many projects that got started and put in little shoe box tubs. I have a stack of empty ones in the closet.

This year my goal is to make as many twin size quilts for charitable purposes as I possibly can. I took 5 to my friend, Karen, last week. She knows where to take them for people who need them.

I learned how to “web a top” by watching a web cam video Bonnie Hunter had on her site. I have read about it on her blog, but I could not figure out how to do it. Seeing it on the video made it all clear and now I am looking forward to getting a set of quilt blocks done so I can try this simple assembly system she described.


I practiced today on a quilt block that was 13 x 13 blocks in size. I was amazed at the speed I put the whole thing together, from layout on the design wall to pressed and back on the wall as a finished unit. I will look at it for a while and make 5 more in the future and make a crib quilt.

Hawk's Nest is my latest ongoing project while I look for the mojo. I know it will hit me full force in the process of looking, so I just keep sewing. A little at a time is better than no sewing at all.